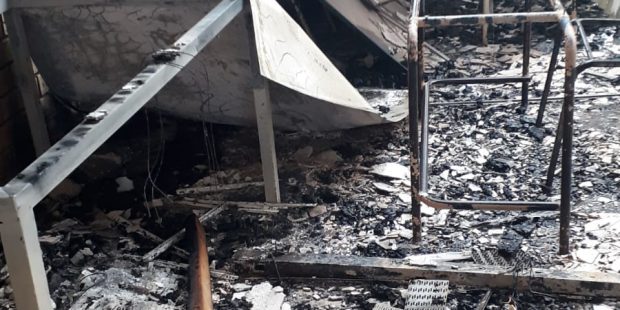 A PRIMARY SCHOOL IN THE NW BURNS

George Madoda Primary School school in Tswaing sub-district was reported to be on fire in the early hours of Wednesday.

The damages include a four classrooms, a library and an office for deputy principal and the cause is not known

The four classrooms are the ones are being used by for Grade 7 learners currently, as a result classes are on hold until an alternative is established.

A case of arson has been opened and no arrests have been made yet.

Education MEC in the province Mmaphefo Matsemela describes the incident as a selfish act and condemns it strongly.

“Today we woke up to a call by the fire department that one of our schools is on fire.
As it is the country is phasing in learners back to school after a three months break due to the Coronarivus pandemic. This delay now is a selfish act of its kind. We plead with the community to work with the department to report any leads to the local police,” Matsemela said.

This is the second case of arson that has occurred at this school.
In July 2019 two mobile classrooms were burnt down.