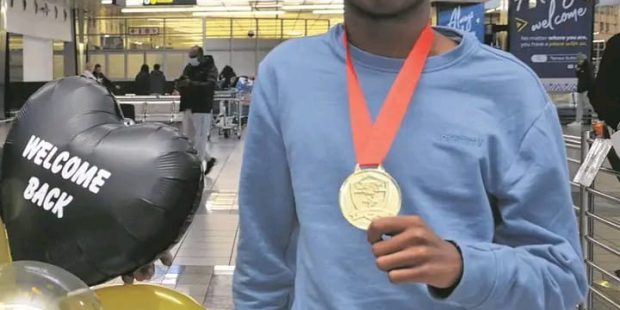 It is with great joy to announce yet another win for Kutlwano Tshatiwa, a 17 year old learner from Gabonewe High School in Rustenburg who won a gold medal in his research and application in machine learning at an International Festival of Engineering Science and Technology (I-FEST2) held Monastir, Tunisia from 24-30 June 2022.

Tshatiwa is one of two young scientists who were selected at an Eskom Expo International Science Fair in 2021 to represent South Africa in Tunisia at this grand tech festival. In his exhibition, he used millions of images to test custom model and distillation for mobile app machines.

The other learner is from Stellenbosch, Western Cape who won a gold medal in his research on physical sound.

One of the most inspiring thing about Tshatiwa’s win is that his knowledge for machinery is self taught. Tshatiwa says his win feels good for that it is recognised at an international stage.

“Winning a gold medal at I-FEST2 was really great for me personally. It was an indication that my research project is not only amongst the best at home, but amongst the best on an international stage. The competition was tough, with other countries presenting really smart and complex research. I also felt humbled by the experience, and was proud to represent my country, “ said Tshatiwa.

“It is such great news to hear of Tshatiwa’s gold medal win at an international level. On behalf of the team North West Education I would like to express my sincere happiness for this young man whose eagerness and enthusiasm for mobile phone machine learning put him at a global stage, competing with other whizz kids from developed countries. He serves as a great example to his peers in our public schools that curiosity for educational content not only does it does it sharpen the brain, it can be more fun and lead to greater exploits if one dares to challenge themselves beyond classroom learning, the world is their stage. These are kind of trendsetters we want to see more in our schools. To Tshatiwa, well done. Soar higher and continue to dance with international stars. We rejoice with you,” Matsemela expressed.