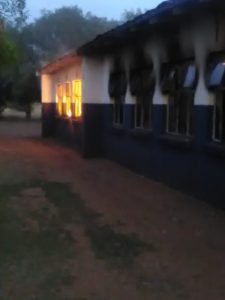 The North West Education MEC, Mmaphefo Matsemela condemned in strongest terms the torching of a block of classrooms at Leruntse Lesedi Secondary School at Vrifwaaght Village near Delareyville.

It is alleged that in the early hours on Friday, 11 October 2019, the school principal received a report that the school was on fire.  A block of classrooms which constituted of two classrooms and the office of the Head of Department were burnt down.

The other classroom amongst the two was used as the storage and a photocopying machine, refrigerator, microwave, textbooks, stationery packs for learners, lawnmower, garden tools, cleaning materials, and files were completely burned down by fire. Whilst in the other classroom, 30 tables and 60 chairs were destroyed by the fire.

The North West Education MEC, Mmaphefo Matsemela condemned in strongest terms the burning of the school.

“I strongly condemn this barbaric incident of burning our school and I am appealing to our communities to report those people who committed this act to the police. These people always torment our schools by stealing the food of the learners and now they have burnt the school. This is a very crucial period within the academic year, learners should be allowed to study without any disturbance”, said MEC Matsemela.

MEC Matsemela highlighted that such deliberate acts are only made to delay the department in fast tracking infrastructure delivery in schools.

A case of arson was opened with the South African Police Service and no one has been arrested to this far.